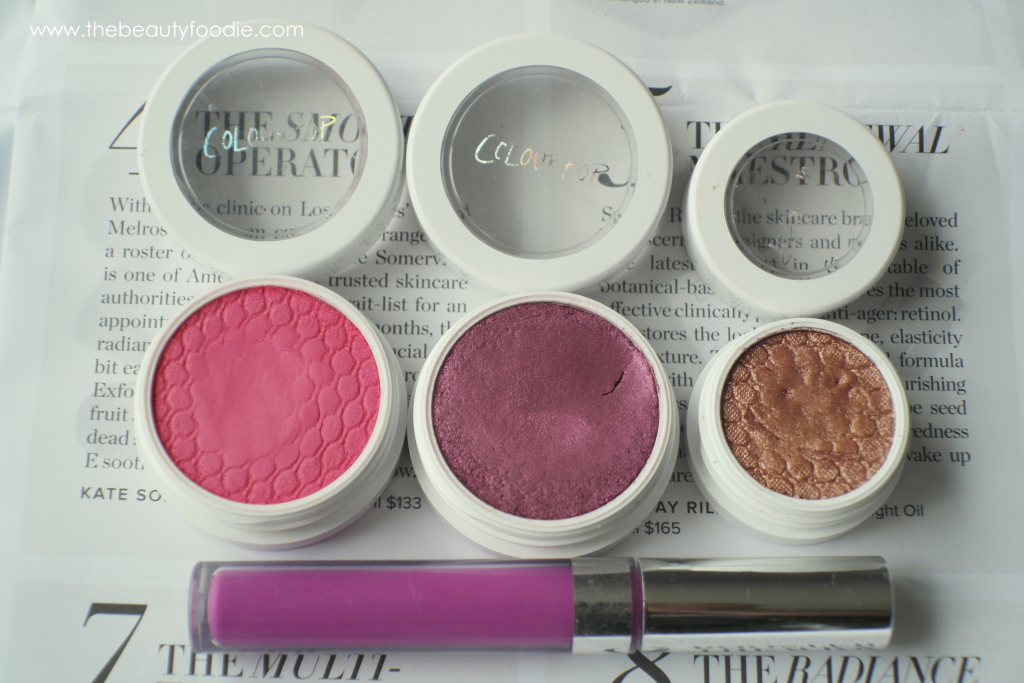 I’m a bit late joining the Colourpop Cosmetics bandwagon:  Beauty bloggers gave this affordable cosmetics range from the US a huge thumbs up throughout 2015. Sometimes I’m slow to embrace hype.  Anyway, executive summary:  The hype is deserved –  I’ve given all the products a bloomin’ good road test since I got them for my birthday in December (forty, cough). I’m now cheerfully reporting back to say “Colourpop is definitely hype worthy!”  Here’s a speedy review of my Colourpop Cosmetics purchases:  Two blushes, one eyeshadow (that required phenomenal willpower, the range of shades is the bomb), one lipstick and a matte liquid lipstick.

January 2016.  It’s been and GONE people!  Here’s a round up of good stuff that lit my internal happy fire last month. Not one to depart from my usual random style, here’s a scrummy squeaky cheese, a swoon inducing lipstick, a crash hot chick-lit read, a recipe that I’m super proud of (with a mini review chucked in) and a Facebook page that nearly causes me to wet my undies with the giggles (my bladder ain’t what it used to be after childbirth, sniff). 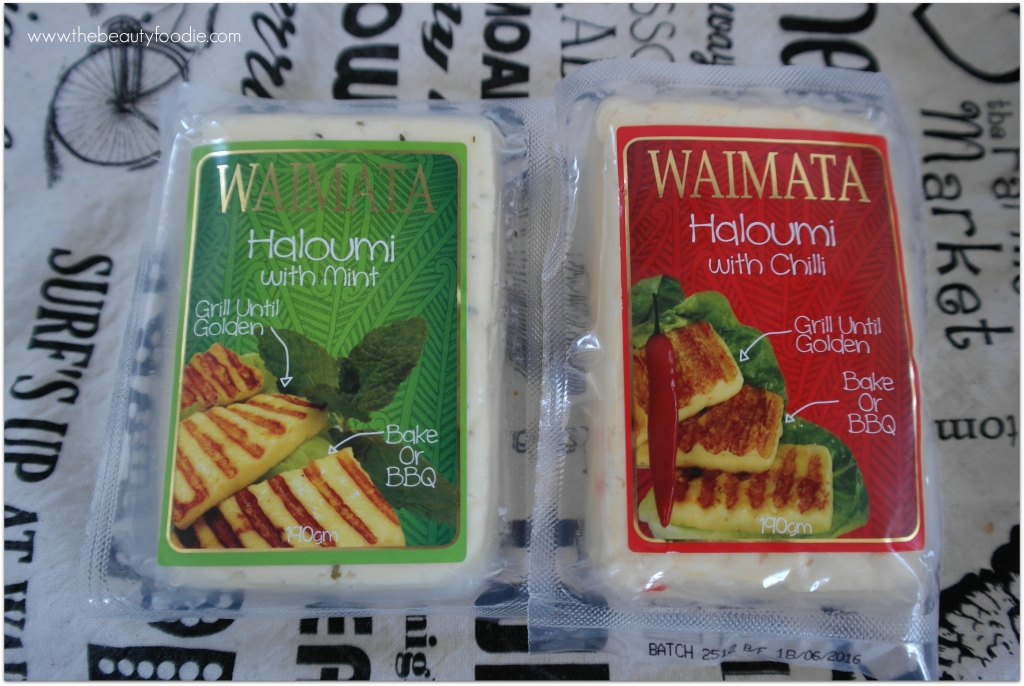 I can’t get enough of haloumi, aka ‘squeaky cheese’ and I’m careful to make sure there’s always a block in the fridge. I reckon it’s a transformational ingredient that can take something stock standard, like a leafy green salad, or an otherwise bland couscous salad, to a whole new culinary stratosphere.

Now simple, original haloumi is already the schizzle, so imagine my delight when I discovered Waimata had flavoured haloumi – three different kinds! There’s their usual traditional flavour, along with mint, chilli and cracked pepper. I’ve scoffed loads of all of them, except the cracked pepper, that’s potentially too gourmet for Rotorua, I can’t find it anywhere! My favourite is the chilli, or maybe the mint. Or maybe the chilli. Hell, they are both to die for.

Haloumi is great for frying or grilling, I adore the contrast of the squeaky crust and the smooth, creamy deliciousness inside. Haloumi is outstanding on any kind of salad (check out this beetroot quinoa dish with haloumi), however we are enjoying it best currently in this recipe.  I also used Waimata mint haloumi at our neighbourhood degustation in November as the first course (there were eight courses, I had a food coma for 48 hours afterwards and a hangover that lasted until Wednesday). Here I fried off the haloumi and piled it high with a olive/herb/sun-dried tomato concoction (yell out if you want the recipe, I’ll blog it). Heavenly delish and it looks flash – and it’s easy to chuck together, which is my kind of entertaining food.  Best of all, Waimata haloumi is affordable foodie fare, NZ$7 for 190g block.  I get mine at Countdown.

That Day in June – By Martina Reilly 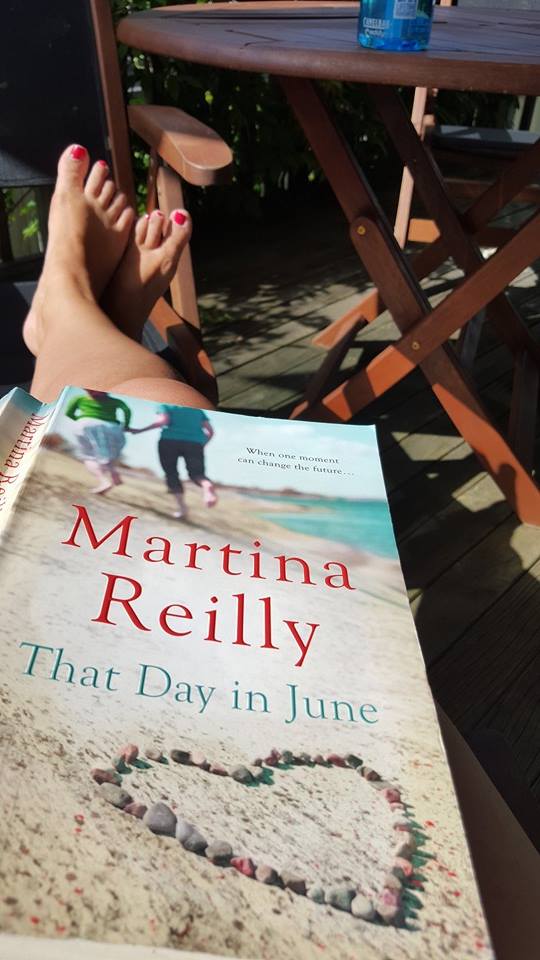 Ah holidays. Here, I turn into an introvert, bury my nose in a book and it’s hard to get much dialogue out of me. Of all the great reads I devoured over my Christmas and New Year holiday, That Day in June, by Martina Reilly, is my standout top read. The plot centres around Max, a high-flying PR exec and Sandy, a runaway who lives on the streets. Every day Max brings Sandy a coffee, an act she looks forward to. Then one morning Max doesn’t show up, so Sandy sets out to find out what has happened to him. When she finds him, she discovers that he’s a broken man who has lost everything and, suddenly, the two of them have a lot more in common than they could ever have imagined.

This heart-warming and unusual love tale reeled me in right from the start and, being the nosey bugger that I am, I was hanging on the edge of my seat with curiousity to find out exactly what drove Sandy to leave home as a teenager, resulting in a life on the streets.  This read is best described as a slightly quirky chick lit. I enjoyed the alternating narrative: The story is told from both Max and Sandy’s point of view. Five stars. Get your tissues at the ready: I got the eye sweats (again, a newish development since I became a Mum!). END_OF_DOCUMENT_TOKEN_TO_BE_REPLACED 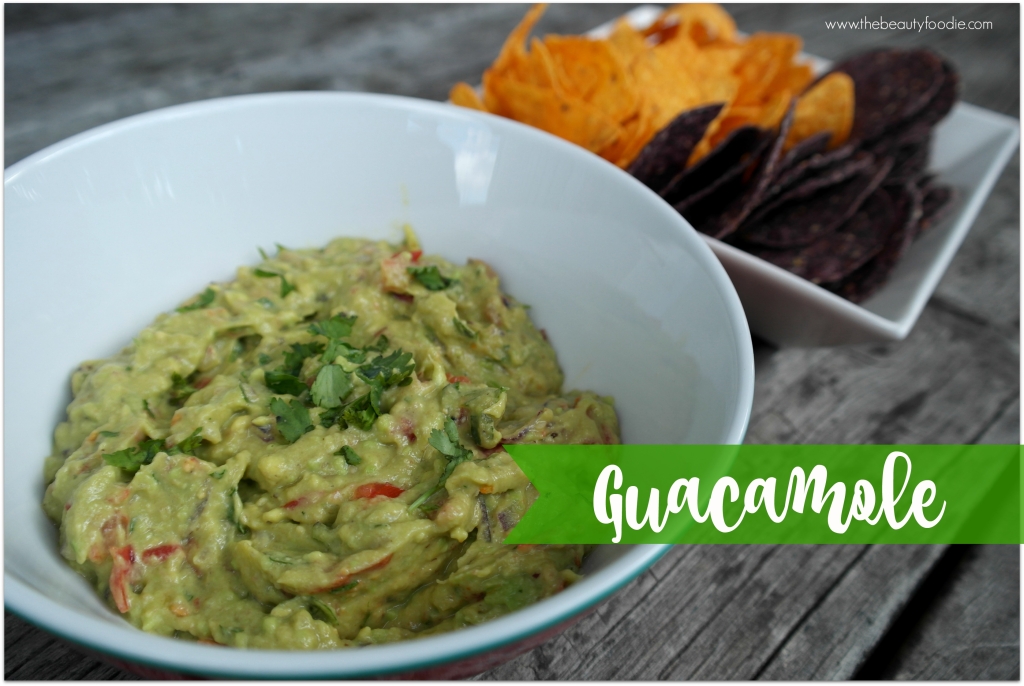 I’ve been hit up by a couple of friends over the summer holidays pointing out that my chunky guacamole recipe isn’t on my blog. Opps!  Best I fix that!  It seriously is the best ever guacamole I’ve ever tried. Yes, I know that’s a big claim!

This guacamole recipe is reasonably well known across several groups of my friends:  I’ve been making guacamole in my Napier circle of friends since sixth or seventh form (I’m old skool – I still think of school years in ‘form years’!).  As for my Rotorua buddies, they first had this in Ohope three or four years ago.  It made such an impact I dished out the recipe and the name got a rebrand: They call it ‘Holy Moly Ohope Guacamole’, LOL. It’s slightly more sexy than plain old ‘Guacamole’, I guess.  Anyway,  lots of my friends tell me they now make guacamole using this recipe which chuffs me to bits. However, it turns out I’ve been a bit lax by  not sharing the recipe on my blog. Suffice to say I’ve kicked myself up the bum!  So, here you go, embrace the rest of the avocado season here in the Southern Hemisphere! END_OF_DOCUMENT_TOKEN_TO_BE_REPLACED 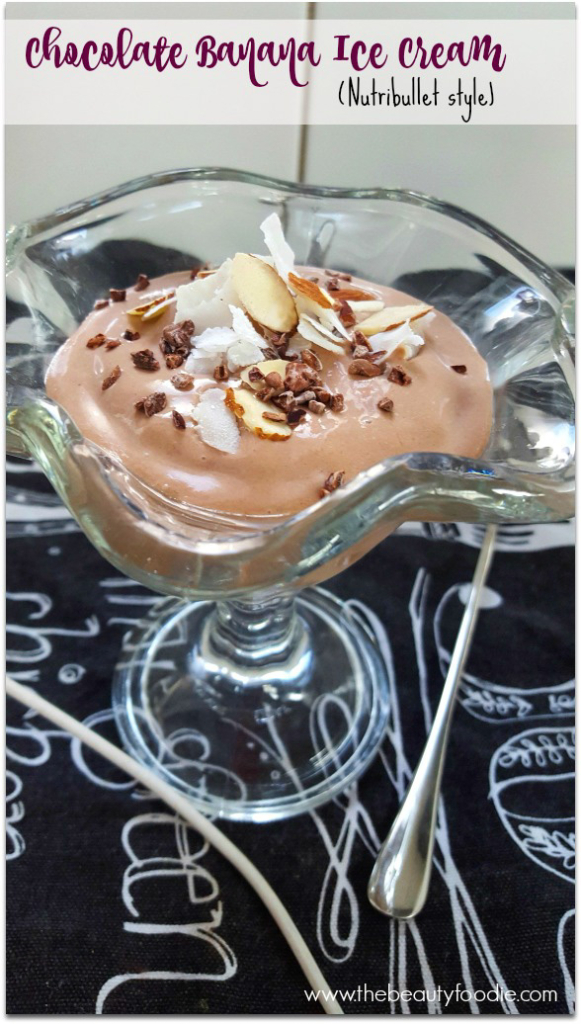 I’m still head over heels in love with my Nutribullet, which is just as bloody well, as I dithered for ages trying to decide: a) Should I get one?  Then, b) Once I’d decided yes to a), which model should I get? Much research on this followed and in the end, I got so overwhelmed, when we were in Briscoes, and I was about to have a melt down, my nine year old said “Mum, for an extra $30 you might as well get the McDaddy powerful one”. He’s so wise. I listened.  Incidentally, do you ever find that, sometimes big decisions are easy – and the little ones see you scratching your head and pondering until the cows come home? My Mum will, at this point, recall that it took me 18 months to decide what dining room table I wanted to buy (after deciding to list mine on Trade Me, spontaneously, to “see if it would sell”. It did).

Anyhoo, one of the tasty treats I’m really enjoying whipping up in my Nutribullet is ice cream.   I’ve always got a stash of frozen bananas in the freezer as my local greengrocer gives them away once they’ve started to “turn a bit manky” and I snap ’em up. What can I say? I’m an opportunist. Frozen bananas are amazeballs as these lend themselves superbly to be whipped to smithereens for smoothies and now, I’ve discovered, – ice cream.  I’ve played around with a few flavours and my favourite, hands down, is chocolate banana.  It’s such a simple dessert and that it’s guilt free on the account of no refined sugar (yeah, I’m still on my reduced sugar soap box). Dairy free peeps will be ALL OVER THIS too. Frankly, what’s not to love? END_OF_DOCUMENT_TOKEN_TO_BE_REPLACED 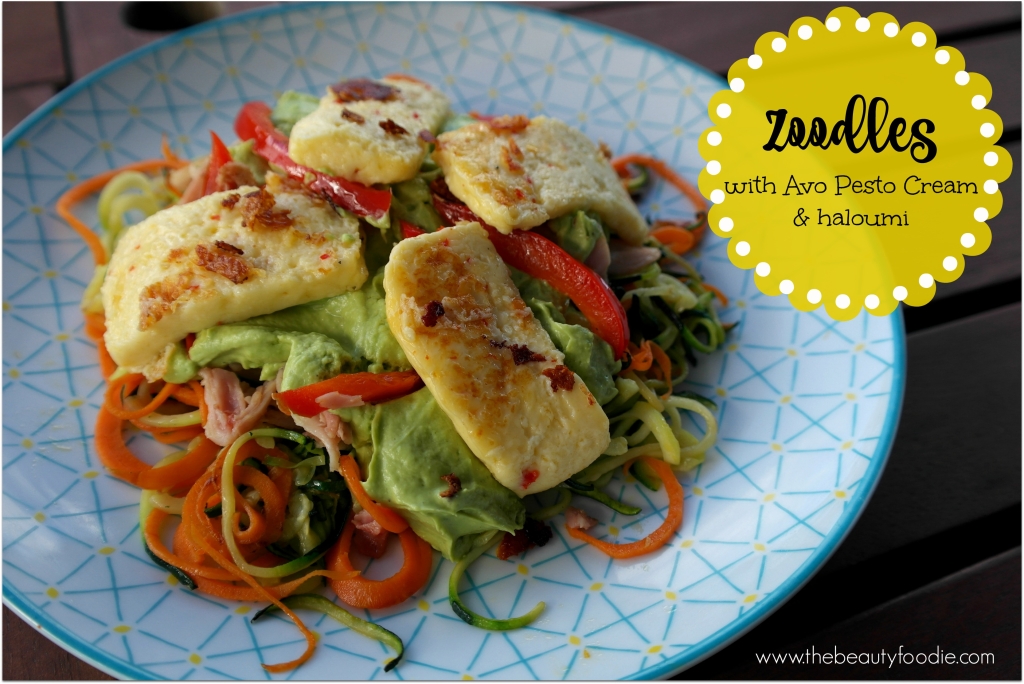 I got home from exercising after work one night last week and the cheesy aroma of toasties hit me as I walked in the door.  “Hi”, hubby said. “Want toasties for dinner?” Whilst I was rapt he’d been proactive, thanks, but no thanks, I didn’t want toasties. I’m trying to avoid bread and starchy carbs at the moment. Why? Oh, you know…. I had a bloody good holiday and ate (and drank) with reckless abandon.  I refuse to weigh myself so I have no idea of the damage: I gauge my weight by the fit of my clothes.  Unfortunately my jeans and I to have momentarily parted being friends and, hell, a new skirt I got at the start of the December is saying “yeah nah, you can’t wear me!” Holy moly, it staggers me how quick I can do damage to my waistline.  Anyhow,  somewhat predictably, I’m on that post New Year’s health regime (and I’m motivated, so long may that continue) so no toasties weren’t really on my dinner cards.  With a rumbling tummy I rummaged in the fridge, fighting off cravings for bread or pasta. Then, out of nowhere, healthy, creative and delicious inspiration struck!  I love it when that happens.   This zoodle with avo pesto cream and haloumi dish was the result of that inspiration and cured me good and proper of my pasta and cheese cravings.   Conveniently I was aided by having a perfectly ripe avo on hand that needed devouring and I’d made a batch of basil pesto I’d made a few days previously.  FYI My stock standard pesto recipe is here by the way, noting the recipe is actually is for coriander pesto, but to make basil pesto just replace the calling for coriander with basil, easy as!

I posted a photo of this dish on my blog’s Facebook page and it got a bit of interest.  In fact, by the time I woke up the next morning, my UK foodie Aunty, Angie, had been to Tescos, made the recipe and eaten it and sent me a message of the finished dish with claims of “Delicious! We loved it and we’ll be making this again!”   Cool!  Since then two of my colleagues have made it for dinner and they’ve given me raving feedback.  Lastly, I’ve also made it again and this time I served it up to my vege-dodging husband.  He declared it “beautiful and delicious” (he’s not known for his compliments, so this is a revelation).

I know the recipe is on Facebook, but experience has taught me it’s not easy to re-find recipes I post there, so here it is, blogged, you know, all proper like. END_OF_DOCUMENT_TOKEN_TO_BE_REPLACED 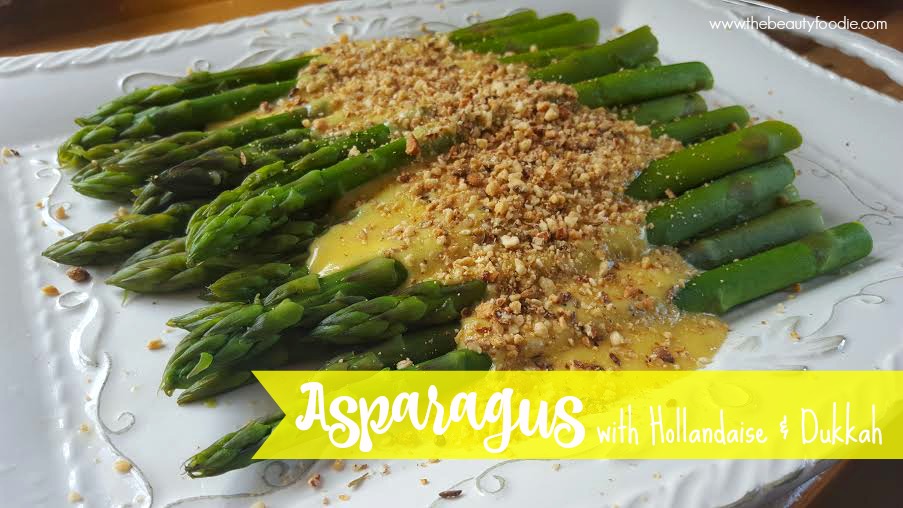 I’ve been dithering about whether I should blog this recipe for asparagus with dukkah and Hollandaise sauce.  Why? Because it’s so easy: It’s one of those recipes that’s ‘not really a recipe’. But I decided to for two reasons:  Firstly, it was my favourite dish on our 2015 Christmas table (well, actually, we dish up on the kitchen bench, but let’s not split hairs) and, secondly: Recipes that are ‘too easy to be really be recipes” are my kind of, err, recipes.  This recipe is super low in prep faff factor, mainly as I always have a stash of dukkah in the pantry that’s ready to go at all times.  END_OF_DOCUMENT_TOKEN_TO_BE_REPLACED 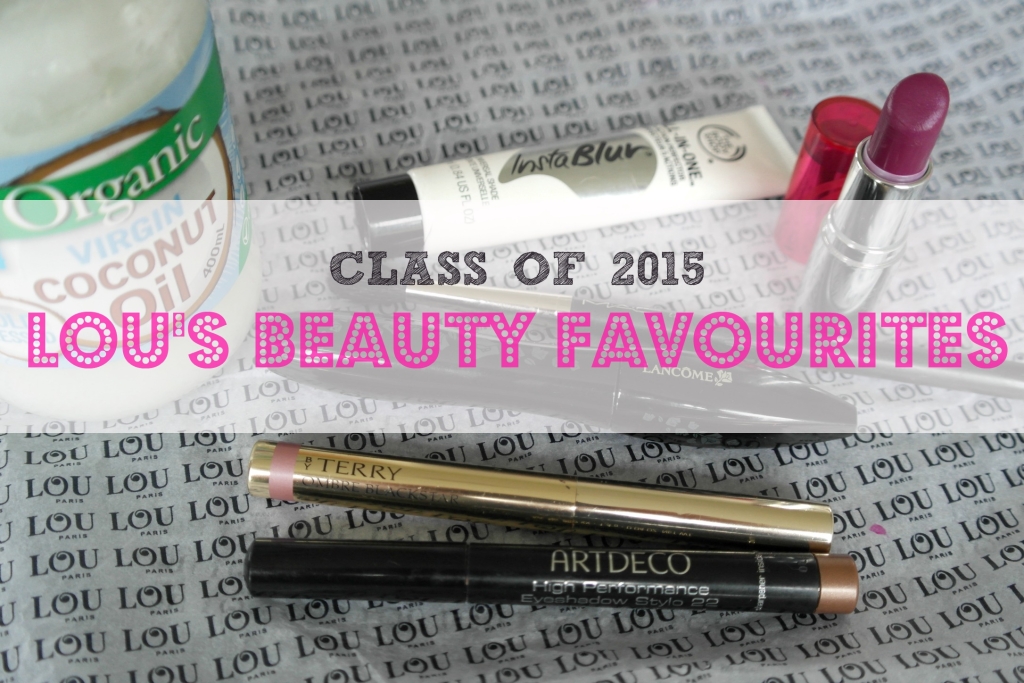 Avid readers of this blog might read this post and think “geez, she’s predictable”.   Yup, in this 2015 round up of ‘all things that have really spun my beauty wheels’ there’s a few products that I’ve waxed lyrical about before (yeah, you probably should have put a bet on at the TAB).  However, just for a bit of balance, I’m pleased to report there’s a few notable mentions: A newer, product that changed my life; A product I tried in an emergency as my usual tried and tested option had run out – and I’ve never looked back. Oh and a product I initially thought was crap. Curious to see what’s made my 2015 Beauty Favourites?  Keep reading! END_OF_DOCUMENT_TOKEN_TO_BE_REPLACED 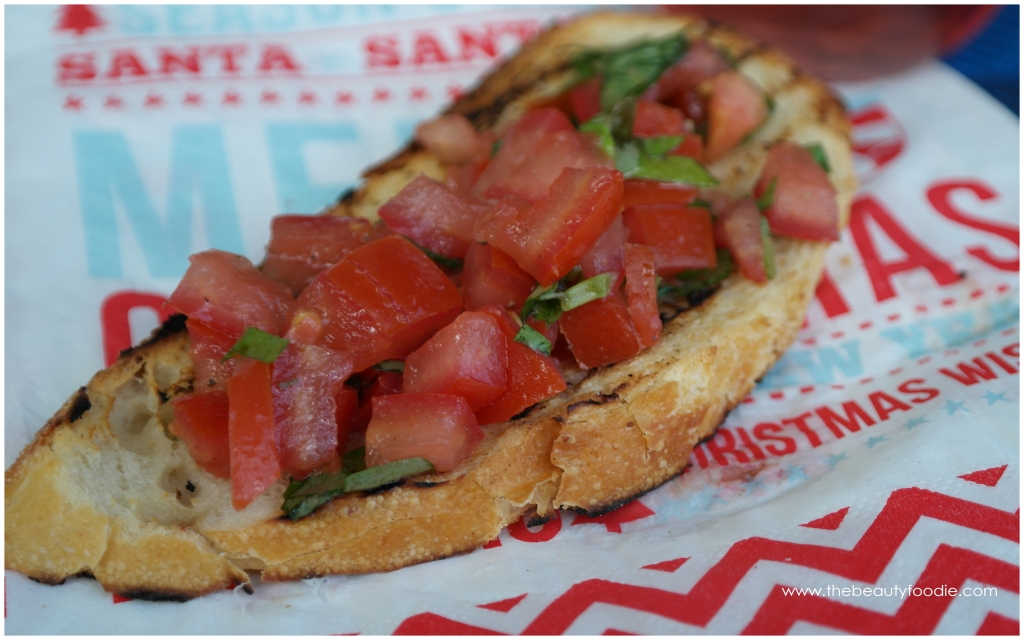 What’s on my menu for Christmas Day? I am still pondering this, however, so far it’s got Damn Yummy Christmas Ham,  my Cable Bay inspired Beetroot and Quinoa salad and tomato bruschetta.  Speaking of tomato bruschetta, holy moly: This is one of my favourite summer recipes and I haven’t shared this recipe with you. Best I fix that and get sharing. I promise, it’s so good, it’ll make your taste buds flip flop.   END_OF_DOCUMENT_TOKEN_TO_BE_REPLACED