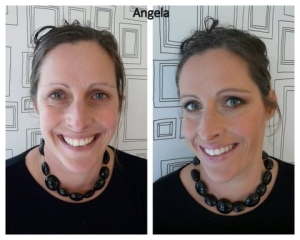 Meet one of my oldest and dearest friends, Angela. The poor love was at the tail end of a rough cold, so a makeover was just the thing to make her feel human again, especially ahead of a cozy dinner  with friends! Here’s before and after photos and a list of products used.

Lips
I was high fiving myself here: I got her in a pink! I used Mac’s Angel lipstick topped with Nars lipgloss in ‘Turkish Delight’ (neither which, FYI, is not on my ‘would repurchase list’ on account of being seriously overpriced!)

The verdict?
Despite being skeptical about the combo,  Angela was rapt with the look. She’s a big fan of a grey smokey eye which I’ve done on her quite a few times, so it took a bit of gentle persuasion to get her in browns.  Success though, the brown with a bit of sparkle were perfect and made her pretty baby blues pop.  I was so pleased to get a text the next day from Angela to thank me and let me know that her husband commented how beautiful she looked. I do like a happy customer!  Unfortunately my camera was playing up and the photos aren’t the best, but don’t worry, you’ll see her again (she’s a regular). x 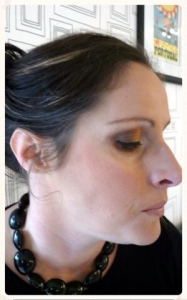