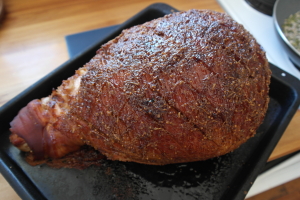 Alrighty, not long to go till the Big Red Man comes! Time to think of Christmas Day’s menu. Well, think no further, I’ve taken the thinking out for you.  If you asked me, or my family for my best ever recipes, this is IT. Easy. It makes me happy even writing this blog post – I just wish I could capture the smell of it cooking and share it with you!  I always have a lot of ‘friends’ in the kitchen when I make this.

I stumbled across this recipe in a Christmas themed Cuisine magazine* when I was in my mid 20s. I’ve made it at Christmas ever since, and I’ll often make for other special occasions, like a family reunion, birthday party, or even if we have a group of friends coming for a weekend (we can feast off slices of ham for days). Actually, I’ve already made this for two separate family occasions in the last month and I’m making another one on Sunday for a friend’s Celebration Lunch.  Last year I shared this recipe with my work colleagues and I was delighted to arrive back at work after Christmas to a flood of emails saying ‘your ham was amazing!’ One colleague loved it so much, she gave it to the caterers at her sister’s January wedding and they put this on the Wedding menu!  But, best of all, my Aunty Angie, who has been hanging out for this recipe, is making this in the UK this year for her family this year – and my brother (who has been living in the UK for far too long!) is joining them. This recipe is for you my wonderful family. Merry Christmas. xx

*I no longer have the issue of Cuisine and I can’t find the recipe online, but full credit to NZ’s Cuisine magazine for this recipe!

Pin It
Tweet
© Copyright The Beauty Foodie 2022. Theme by Bluchic