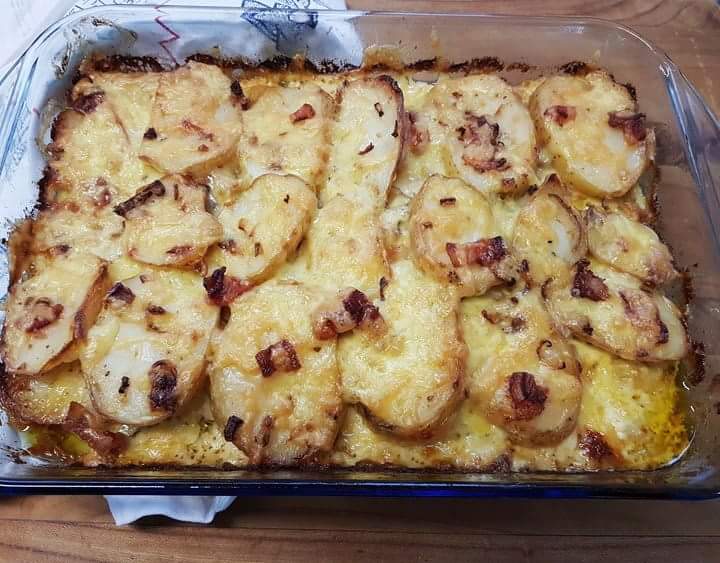 Most people have a potato bake ‘go-to’ recipe, eh?  Not me, my efforts are always slightly different and TBH always a bit ‘meh’.  However, I’ve nailed it: This is the potato and bacon bakes of All Potato Bake recipes. I could eat this for breakfast, lunch and dinner, and I’m not even a massive potato fan (apart from chips… #nuffsaid).  In the midst of a cold Rotorua winter, danger: For me, this is comfort food at its finest.

Hang on, if you are calorie counting, stop right here. Exit out of this blog. This dish is totes not conducive to weight-loss, in fact hubby said to me, and I quote “Shit, we’d better not eat this too often we’ll get fat’. In our house, hence, we call this ‘Full Noise Potato Bake’.

Firstly, as a bit of a disclaimer, the origins of this recipe don’t like with me, nope. They lie with my buddy Portia.  We went to her house for dinner a few weeks back and she dished up her version of this. I  nagged her for the recipe, as it was WAYYYY better than my potato bake. Finally she relented and shared the secret. The two secrets are, incidentally:

The next day after Portia wowed us, which was a Sunday, we all had a hankering for Portia Potato Bake.  The hankering was so bad that, in the torrential rain I set off to Countdown on a mission for Chicken Soup and potatoes (cupboards were bare).  Me being me, I had a fiddle with Portia’s recipe and this was the result. I nailed it, if I do say so myself: It’s same, same, but different, to Portia’s Potato Bake.  The addition of bacon and onion knocked it out of the ballpark, IMO.

*Who is LANA? Read it backwards… 🙂