If you’ve been following my blog for a while you’ll know I’m obsessed with my nightly pre-cleansing routine. Pre-cleansing that is, to get rid of all ‘my face’, before embarking up on my regular skincare routine. I use either coconut oil or Clinique’s Take the Day Off Balm as my pre-cleanser before I launch into regular face cleansing (usually double cleansing!).

Well, in the interests of market research I’ve branched out to try some new  products.  On a trip to Farmers a wee while back, I stumbled across a rather modest looking stand from Lipidol.   I paused, intrigued, largely at the lack of prominent in-your-face signage and promptly discovered, thanks to some research on my phone, uncovered that the range is from Union Swisse, the makers of Bio-oil. Everything on the stand was $9.95: You know what a bargain hunter I am! 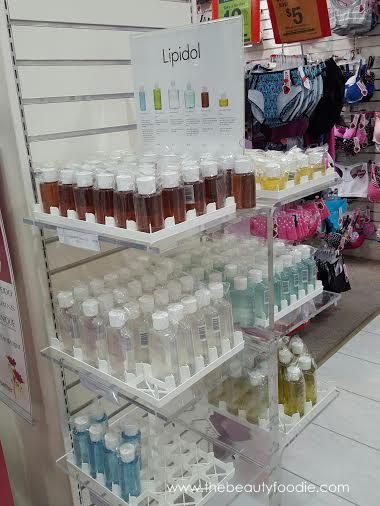 Being infamously indecisive (it’s a real personality design fault) I dithered for a while: Decisions, decisions. I finally opting for Cleansing Face Oil as the back of the bottle promised it would remove dirt and strip away make-up without stripping the skin’s natural oily layer.  Just to deviate for a second, I’m developing a love for facial oils as, the trick to healthy skin is to stop it losing moisture in the first instance – which is where facial oils play a great role: They can act as a layer to trap moisture in the skin.  Now, here’s the thing, as an oily-skinned lass, I’m super surprised that my skin is less oily since I started using oil-based skincare products.

Anyhow, I digress. How this oil works is that you apply it with your finger tips to a dry face. The dirt and make-up will bind with the oil. Add a little water and continue massaging. The oil will emulsify to form a watery cream. Rinse off.   Done.

My verdict?  This stuff  strips away all of my make-up and dirt, as promised.  It also smells divine, thanks to the rosemary and niaouli essential oils.   It works. Does what it says. Apparently you can stop there with your cleansing routine, I personally don’t, I use this oil as a pre-cleanser and then move onto cleansing (with my beloved Moreish Foaming Cleanser), probably as I’m a creature of habit (and I do wear a lot of make-up that needs to ‘be gone!’).   [UPDATE: March 2017 – Read below]

How does this wonder product stack up to my beloved coconut oil or Clinique TTDOB I can hear you wondering?  This is a toughie, as Lipidol is approx $50 cheaper than Clinique’s Balm. It’s also $5 cheaper than a regular sized jar of coconut oil! However, there’s one area that Lipidol Cleansing Face oil falls short in my opinion:  Coconut oil and Clinique TTDOB both take off all my eye makeup. By contrast if you use Lipidol on your eyes, and you get it in your eyes, it will sting like a bastard. Having learnt the hard way, not once, but twice, I don’t use this anywhere near my eyes, it’s just not worth the pain. I thought I was going to go ‘effing’ blind.  Having learnt from this horrendous experience, when I’m using Lipidol I remove my eye makeup with a specific eye make-up remover now (Neutrogena’s oil free make-up remover is my favourite).  So, for this reason alone, I still prefer coconut oil (in first place), followed closely by Clinique’s offering.

Lastly, the simplicity of the whole Lipidol range is nice. Each bottle comes, as is, with no unnecessary packaging. The greenie in me appreciates this.  That said, not sure what their bottles are made out of. By the way, check out Lipidol’s groovy website: So simple, so on point:  A bit like their products.

Lipidol is available at Farmers and – breaking news, it appears at some New World supermarkets (I’ve seen it at Greenmeadows New World in Napier – I can’t comment on other NW stockists).   Just don’t bloody get it in your eyes, shit. It STINGS… Learn from my mistake!

If you are keen to know more about my current skincare routine, here’s a post I did a few months back (noting I’m now giving Essano’s Rosehip cleanser a bash… What can I say? I’m an enthusiastic product tester!)

Have you tried any Lipidol products?

PS My skincare routine is based on the words of wisdom from skincare guru Caroline Hirons. Check out this post for more info.

*MARCH 2017 UPDATE: I’ve been on a journey in 2017 learning about ingredients in beauty products. I’m heading down a route, where possible, of natural-based skincare.  I’ve learnt that, thanks to Aunty Google,  almost all of the Lipidol oils (except the cleansing body oil) contain Paraffinum Liquidum as the first ingredient. I’m out: Won’t be purchasing from this range again. Back to coconut oil I go! That works a treat…