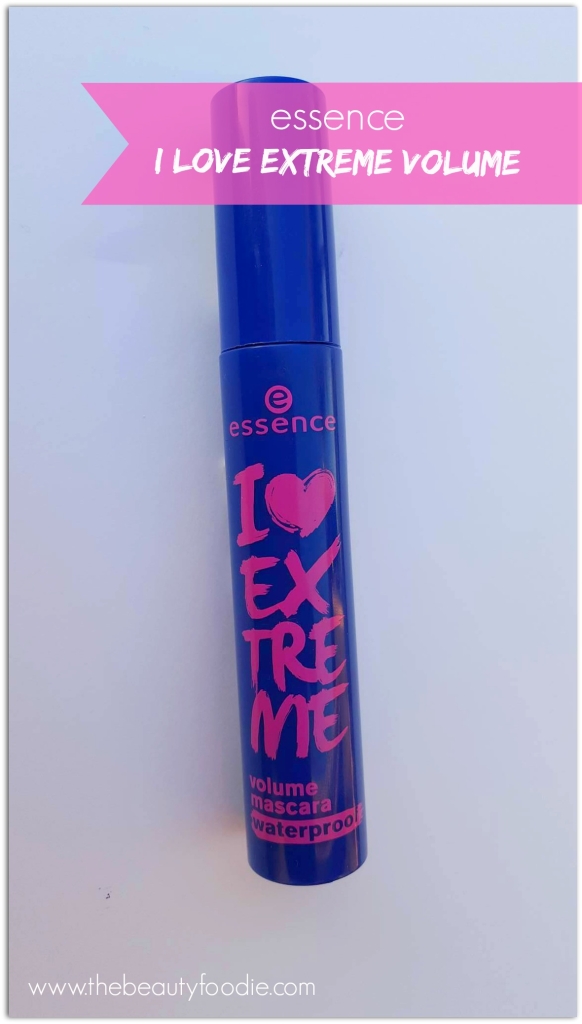 So, there I am, at Easter, in Welly, at Farmers Cuba Street, having a debate with myself over the purchase of a $6.30 mascara.

“You don’t need it. You have several new tubes of mascara already” screamed penny-pinching Lou. This is ‘new Lou’ who is keeping a steady eye on her ASB bank balance after commencing a new part-time job (a lifestyle ‘adjustment’ is currently underway).

So, a $6.30 mascara, hit or miss? It must be said: I had low hopes. I mean, seriously, I’m a mascara addict and I’ve been known to fork out close to $58 for a mascara (Lancome…. contented sigh) and declare “it’s worth every cent”. I’m a tough mascara customer. So, here’s my thoughts on the $6.30 jobbie…

Let’s back up the bus.

What mascara? What’s the brand?

The budget mascara in question is ‘I love Extreme Volume’ from European beauty giant Essence Cosmetics. As a brand, Essence is a relative newcomer to NZ’s beauty shores.

Back to my mascara selection. There was lots of mascaras on the Essence stand. After some deliberation I narrowed my selection down to the waterproof formulas. I did an ‘eeny meeny miny moe’ to aid my selection.

I only ever wear waterproof mascara on account of two reasons. Firstly, I have VERY oily eyelids and I can’t abide all the smudging that used to happen with non-waterproof mascara. Secondly, being an eyelash curling addict, normal mascara straightens out my eyelashes, whilst waterproof keeps the curl in place allllll day (learning this was a game changer). Mascaras like Xlash can literally change your life, just saying.

My first impressions of this mascara was “Holy shit! That’s a big mascara wand”. No joke, this has the biggest brush of any mascara I’ve ever used. Hence there’s a word of caution: If you have small eyes or are prone to getting mascara on your nose, in your hair, in your brows, or on your teeth (I’ve seen it all), stop reading. This probably isn’t the mascara for you. If you have intermediate level-ninja mascara application skills, or are confident you are on the cusp of securing ninja status mascara skills, keep reading.

In the interests of thoroughness, here’s a whistle-stop overview of I love Extreme Volume mascara (waterproof). Here’s the good, coupled with the irritating, in the interests of balance. I’ve used this mascara everyday since Easter, so it’s had a decent road test.

Farmers is the NZ stockist for Essence cosmetics, however, annoyingly, not all Farmers in NZ stock the range. I emailed them to find out who the stockists are (to save you getting disappointed) and these are: Palmerston North, Albany, Henderson, Riccarton, Porirua, Dunedin, Hornby, Cuba St, Shirley, Manukau, Chartwell, Hastings, Wanganui, Upper Hutt, Whakatane, Taupo, Kilbirnie, Pukekohe, Gisborne, Glenfield, Levin, North West, Whakatane, Whangaparaoa, Papakura. Not Rotorua, Tauranga or Napier, my most frequented Farmers’ stores. Sigh.

Post script: November 2016: You can now buy Essence Cosmetics online from Pricewise Direct (as well as in store). Yippee.

This is one bloody tremendous mascara. Big thumbs up from me. I can’t declare it quite as good as Lancome Hypnose Doll Eyes mascara, that’s on a total pedestal for me, on it’s own island in fact, my number one: You get my drift. However, for price and quality (with a few marks removed because of the smudging on my upper eyelids) this gets some oohing and ahhing from me. I can’t think of a mascara in the ‘cheap stakes’ that I like more than this one. Would I repurchase? Hell yes, based on quality and price.

Lastly – a confession and an apology….

I blogged in last month’s Lou’s Fave’s blog post that I was really enjoying Maybelline’s Lash Sensational mascara. Well, knowing then what I know now, I wouldn’t have written that semi-rave review. Why? Because Essence’s $6.30 offering blows the pants off Maybelline’s $27 efforts and Maybelline has been biffed into Neverland (i.e. the drawer of doom).