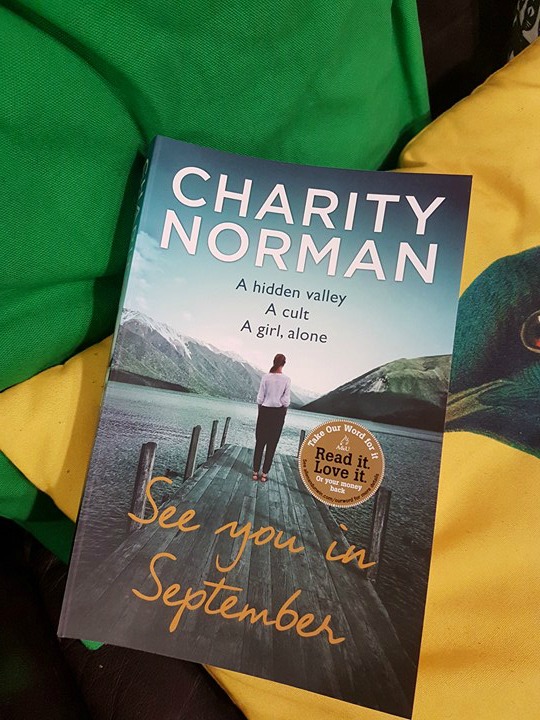 See You In September is Charity Norman’s latest novel. I’ve been waiting for this book to be released for, ages. Now, just in case you missed the memo: I’m a BIG Charity Norman fan and I’ve been stalking Charity’s Facebook page, so eager I was for updates on her writing process of her latest book! I knew that when See You In September came out I’d get it – and write a book review.

Oh. It was worth the wait. I loved See you In September.  It was gripping in a way that was, I must add, slightly disturbing, upsetting, heart-in-the-mouth, captivating, kind of way. Mum read it before me. She enjoyed it too, noting she also used the word ‘disturbing’ to describe it.

But first, some background. I fell madly in love with Charity Norman’s work when I read her cracking book, The Secret Life of Luke Livingstone. If you haven’t read this… Do. It’s the best book I read last year and, funnily enough I had a Facebook message from blog follower Emily, who is currently sunning it up on holiday in Fiji. Emily took The Secret Life of Luke Livingstone with her, on my recommendations. She’s been ignoring her family. She reckons the book is fab too.

My Review – See You In September

See you in September is the tale of Cassy, a young and intelligent English girl, who is heading on a short break to New Zealand with her boyfriend Hamish, before returning home for her best friend’s wedding. Meanwhile, temporary escapism beckons for Cassy, who feels the the weight of her Dad’s expectations on her shoulders.  Cassy’s Dad Mike, who has his heart in the right place, simply wants the best for his beloved daughter and he is relatively forceful in his ‘encouragement’ of Cassy to achieve a high-flying law career.

Cassy, meanwhile, usual story: Has other hopes and dreams for her life and resents her Dad for putting his sticky beak in, because, you know: What does he know?  A tiff unfolds about this difference of views in the car, en-route to Heathrow Airport. Meanwhile Cassy’s Mum, Diana,  takes on the role of peacekeeper. Diana, incidentally, would do well working for the UN.  Scene set: Tension is rife as Cassy farewells her loving family as she boards the plane bound for En-Zed.

Cassy blew a collective kiss at them. ‘See you in September,’ she said. A throwaway line. Just words, uttered casually by a young woman in a hurry. And then she’d gone.

Upon arrival in Auckland, Cassy and her boyfriend have a (figuratively speaking) dust-up whilst hitchhiking to Taupo at an Auckland petrol station. They break-up and Cassy makes a decision in the heat of a moment that changes the course of her life forever. Cassy tells Hamish she’ll meet him in Taupo the following day and she accepts a ride from some people heading to Rotorua in a beaten-up white van. As Cassy starts to unwind in the van that’s filled with happy, smiling and welcoming folk, she accepts their invite to enjoy a hot casserole and a bed for the night at their farming community.

The farming community turns out to be Gethesame. A sustainable, entirely self-sufficient community located on the banks of Lake Tarawera, Rotorua. The setting is picture postcard perfect, as well as off the grid: There’s no technology and sod-all contact with the outside world. Well, there’s one computer that’s locked away that Cassy has fleeting access to: To inform her family she’s not coming home.

You can see where this is headed, right?

It’s a cult. Cassy, weak and vulnerable, is persuaded to stay on with the community. Cassy is spellbound by Gethesame’s charismatic leader, Justin, who thinks he’s the second coming of Jesus (!). Through hypnosis and mind control, Cassy gets sucked in, good and proper. But does Cassy escape before Justin’s prophesised Last Day?

Best you get the book and find out.

The story is cleverly shared from two perspectives. We have Cassy’s perspective, told as she integrates into her new life at Gethesame. Then we have Diana’s perspective, Cassy’s loving Mum.  As a Mum, I was yanked into Diana’s world and felt Diana’s pain and distress at the hand of her daughter’s decisions. Frankly, reading the story from Diana’s narrative, I felt ill. Not as ill as I felt, mind you, reading the excepts peppered throughout the book titled “The Cult Leader’s Manual: Eight Steps of Mind Control”. Holy shit.

This story is beautifully written and illustrates, so cleverly, how people get ‘sucked in’ (for want of a better phrase) into a cult. There were moments where, as a reader, I wanted to reach through the pages of the book and shake Cassy and maybe even give her a little slap, so frustrated I became at her naivety. Yet, there were other moments where I could admit, with great reluctance, that I could understand how people could fall for an alternative way of life, like the one that Gethsemane offers.  Feeling slightly vulnerable and weak? Then someone shows you love, kindness, tenderness and compassion…? Yeah, I get that.

Long story short: See You in September is a believable read!  My ears always prick up when I hear stories about cults in the media, so this interest alone made this book a “must read” for me.  That said, I must confess that I found the religious references in the book a little tedious (no offence intended). However, I concede that these are pivotal to the story-line.

Once again, Charity manages to hook you in (line and sinker) with the opening lines. I could feel the tension in the book right from the opening sentences. “It doesn’t look like the scene of death. It looks like paradise”.  Alas, right from the get-go: It is clear – shit has gone down. I often struggle to start a new book, but this was NOT the case with this book. Nope, just like the opening lines in The Secret Life of Luke Livingstone, Charity knows how to grip a reader! I finished this book over two days, I hid myself away, abandoned the housework, ate crackers, declined all verbal dialogue and read until the early hours of the morning. Gripping stuff.

Now, let’s talk about the setting of this book! Where’s it set? Fifteen minutes up the road from where I live! The references to Rotorua, Taupo, Lake Tarawera, even Rotorua Library and their free WIFI, tickled me pink. Charity’s prose perfectly captures the beauty of the landscape. In fact, as I read, I could see the ‘movie’ unfolding in my head.

Oh Charity, you are a clever lass. When’s this hitting the big screen? I have a cast of characters ready to go.

Have you read any of Charity Norman’s books? You are missing out! Get in!  Oh, I”m running a giveaway of this book on my Facebook page. Keep an eye out on 1 July – you won’t want to miss out on this!

Follow Charity Norman on Facebook here. Psst! If you love See you in September, tip from me: Let her know.