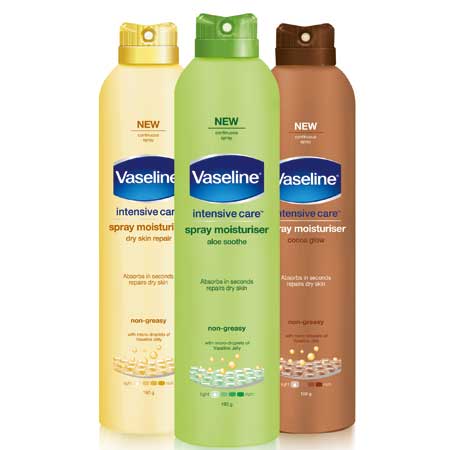 After Nivea’s In Shower Moisturiser, you know, the one that I reviewed that I wasn’t backwards about coming forwards on (it was rubbish), I had low hopes for Vaseline’s newest offering in the moisturising Convenience Department: Vaseline Intensive Care Spray on Moisturiser.

I’m lazy when it comes to moisturising. I like a super hydrating product but I don’t have the time (nor inclination) to spend much time rubbing it in. Which is why I gave this a go. Spray it all over your body, holding the can 10cm from your skin.  After spritzing, you quickly rub it in – good to go.  A bit like Neutrogena’s spray on sunblock, if you’ve given that a bash.  In a nutshell, this is moisturiser-spray-and-go.

So… Cutting to the chase, is Vaseline’s Spray on Moisturiser any good? YES! It is! I really like it. I got this four days ago and have used it every day since and am rapt to report that it truly moisturises and absorbs into the skin, just like it claims.   Bonus too – I’m so lazy, I’ve worked out that, if you stand around for about twenty seconds in your birthday suit post spray (heck, multitask and brush your teeth if you must keep busy), it absorbs by itself – no rubbing in needed.  It’s also handy for moisturising wriggly young kids, I spray my wee man from head to toe. Done. No fuss [sigh of content].  The fragrance is lovely, light, not overpowering.  I tried Cocoa Glow:  I’m a sucker for anything with a chocolate scent.

In summary:  Convenient: Roger that. Easy? Totally.  Save you time? Absolutely.  Will I buy this again? You betcha. There’s three varieties by the way. I can only speak for one Cocoa Glow so far, but suffice to say I’m looking forward to trying the others next.